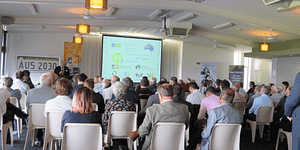 The Hydrogen Society of Australia has brought and celebrated this event in Australia on the 8th of October 2019 as the first National Hydrogen Day in Australia, with the support of the FCHEA.

The second Hydrogen Day event in 2020 brought a lot of support from a range of industry and public.

Please, join us in person or online for the 3rd Hydrogen Day celebration by the HSA on the afternoon of Friday the 8th of October 2021 to show your support for the Hydrogen Economy development in Australia.

National Hydrogen and Fuel Cell Day is an initiative of the Hydrogen Society of Australia (HSA). It is proposed that Australia follows the US to celebrate Australia’s contribution to the development of green energy hydrogen on the 8th October, which is the atomic weight of hydrogen (1.008) in American date format. The aim is to give Australian industry a platform to publicise the benefits of hydrogen energy and fuel cell technologies to all Australians.

Australia is uniquely placed to become a world leader in hydrogen energy production. Industry leaders are working with experts in Universities and collaborating with State and Commonwealth Government representatives to develop hydrogen and fuel cell technologies that will address the most pressing global environmental and energy issues. Australia has an abundance of sunshine and wind that can be harnessed to create hydrogen rich fuels that are clean and efficient. Hydrogen that is locally produced using green energy technology will allow Australia to transform its currently carbon intense resource sector. The use of zero-emission hydrogen for the processing of iron ore and bauxite into steel and aluminium will create substantial new economic opportunities. Recent technological advances that have been made in the safe storage and exportation of hydrogen fuels will also allow Australia to capitalise on the clean energy market gap in Asia, notably Japan and Korea. Fuel cells, utilising hydrogen, have already been developed for use in zero-emission, light duty motor vehicles, as well as industrial vehicles and buses. The use of hydrogen fuel cells will play a fundamental role in the reduction, or total elimination, of damaging vehicle emissions in cities and in rural areas as they will power the numerous trucks that constantly travel vast distances across Australia. Stationary fuel cells will be used to generate electricity that will greatly enhance the capacity of the grid in the short-term and very likely provide the bulk of Australia’s electricity production in the long-term. Importantly, hydrogen stored in fuel cells has the potential to supply reliable power to people living in rural and remote communities, both in Australia and overseas. Experts predict that the economic benefits of using green energy hydrogen in the place of fossil fuels will be realised within the next 10 years.